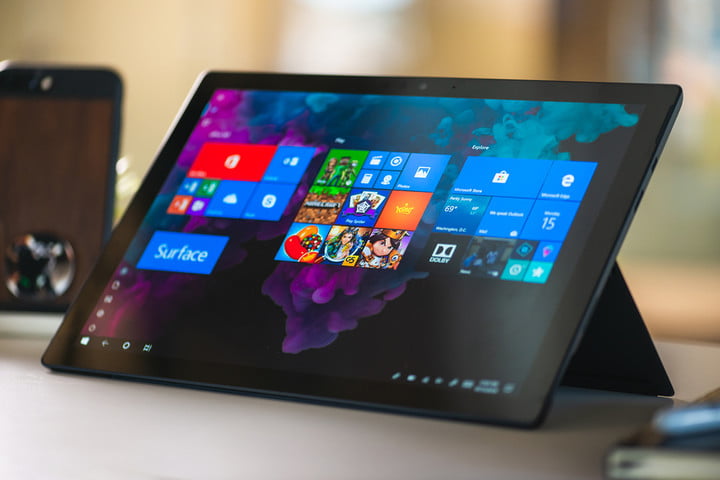 The Surface Pro is a first-generation device that ran a 64-bit version of Windows 8 Pro operating system with an upgrade to Windows 8.1 Pro, and in time also Windows 10. It was announced initially on June 18, 2018, later it was renamed as Surface Pro by Microsoft, and on February 9, 2013, it was launched. The first-generation Surface ran on a Windows alternative called Windows RT. The 1st, 2nd, 3rd, and 4th generations Surface Pro can run Windows 10. The Surface Pro 4 has a RAM of 4GB to 16GB depending on the configuration and an Intel Skylake dual-core CPU.

Microsoft Surface Pro is a smooth productivity device for work being done. These devices have gone through various renewal since the first Microsoft released in October 2012. The Surface Pro devices are useful for business and give a major boost to business as most of the industries/companies highly rely on them.

The Microsoft Surface is a device that is skillfully and truly a force to be reckoned with. When you look at this tablet and all of the features that it is not surprising at all that repairing Microsoft Surface, it isn’t easy. However, the repair or fix is possible, although no one wants to think about the damage when they spend a large amount of money on such gadgets there is a that a Microsoft Surface will go wrong.

GET IT FIXED FAST AT REPAIRADVISE

The Microsoft Surface is an incredibly suitable and portable device, but unfortunately, it is more likely to get damaged if being dropped or stepped on by someone.

If you own the Microsoft Surface Pro, then you should have a reliable Surface Pro repair that you can count on with your device and peace of mind as well. RepairAdvise is here to fulfill your repair needs. It doesn’t matter if the Surface Pro needs a screen repair to a battery replacement, RepairAdvise has the professionals, quality-parts, tools, and skills to get the job done right without any hassle and delay. Our experienced technicians have nearly repaired every type of Microsoft Surface Pro damage, and they have the ability to bring it back to life.

We offer repairs on the following Microsoft Surface Pro models

There are a number of problems that can happen with the Microsoft Surface PRO. Screen repair is the most generally we see blame at any rate after some time problems may develop with the charging port, battery, camera, or ear speaker. In case you are looking for expert repair for Microsoft Surface PRO in Singapore, then you can stop looking and visit RepairAdvise.

We are skilled Computer, Mobile and Laptop repair service providers with addition in a substantial number of devices added to our collection. We do use genuine parts, and you can expect a fast and same-day recovery for your Microsoft Surface Repair Singapore from our repair service center.

COMMON PROBLEMS OF Microsoft SURFACE PRO THAT REPAIR BY US!

There are a lot of problems in Surface Pro devices, which make them useless, but with us, you can utilize them again as they are new. Well, here are some of the common issues that can happen to the Surface Pro:

A common issue faced by Surface Pro users is the improper touch response of this device. It is quite annoying, and there is a chance that the touch stops functions at all if not repaired on time. You should immediately get the repair done so your work shouldn’t affect it. Some of the touch issues are:

Another common problem that can occur is the smashed or cracked screen. The screens are receptive to cracks, similar to mobile phone screens. The Surface Pro comes with a touch screen system, due to which these are more sensitive and can be smashed or cracked if fall, step on, or hit slightly. Screen issues might include:

The battery of a laptop can become weak after some time, or it can be damaged due to overheating. The battery requires a proper examination, and then the issue to it should be fixed if it is fixable, and if the issue is unrepairable, then we will replace the battery. Common battery/charging issues include:

The Surface Pro can also have sound issues in which the speaker may stop producing sound at all or produce disturbing sounds. In this way, you always have to wear headphones, which is not suitable for your ear health as well. It is necessary to repair it as soon as possible.

WHY CHOOSE US TO FIX YOUR SURFACE PRO?

We have certified professionals with over 100,000+ devices repaired. We have screen replacements for all Surface Pro models. We use genuine original quality parts, and we are confident in repairing your set.

You can drop off or send in courier your Microsoft Surface Pro for a detailed quote at our store located 5 Purvis Street #02-01 Singapore 188584. We provide the best solution for our customers.