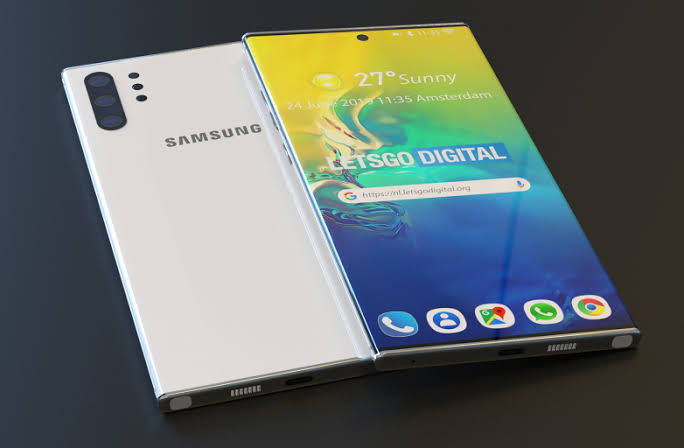 With the increase in the competition of smartphone companies every day, every company launches a new model of their mobile phone. The new model of the smartphone might contain some advanced features, higher resolution camera qualities, bigger screens, and so on. The model gets popular when people take more interest in that mobile, and that leads to a higher demand for that mobile, and ultimately to higher sales. Several companies have gained people’s trust, and comply with their consumer’s demands, and choices, one of these companies is Samsung. Samsung was founded in 1938, and since 1990, they have globalized their sales all around the world. Every year Samsung originates a new model of a smartphone, and one of them is Samsung Note 10+.

Everyone likes to hold a bigger phone in their hands so that they could easily show-off, with Samsung Note 10+ you are going to rock-it off. The size is not the only good thing, the new sensational colors which have been released, just upgrades the look of the smartphone. Aura pink and aura red are the new most demanded colors in the market, so think fast until it’s too late. Moreover, the storage capacity is not the thing you should be concerned about, as 8/12GB RAM and 512GB memory storage are the full stops to any questions. The 4300mAh battery can also last up to many days, with unlimited browsing or usage. The camera’s lens includes 12MP/12MP/16MP rear cameras.

Everything has their own pros and cons, though Samsung Note 10+ have some flaws, you can solve those problems easily, without using any complex methods.

Users discovered a major issue with fingerprints scanning, which allowed unregistered fingerprints to unlock the phone. This was a privacy issue and was addressed immediately to the Samsung Company after they knew, they introduced a patch in October, which didn’t allow unregistered fingerprints. However, some of the people still had some issues regarding the fingerprint sensor, so the users tried removing the screen protector, and their problem was solved at once.

Poor Signal Strength and its Solutions

Many people have also complained about inadequate signal strength by cross-checking it with some other smartphone. As the bars were fewer on the Samsung Note10+, it was quite clear that the device didn’t allow good signals. The solution to this problem is in your phone only, you need to switch on the Wi-Fi Calling tab for smooth functioning. Samsung Note 10+ repairs are not big a deal, all answers to your problems are in Samsung Note 10+ only.

Accidental Touches and Solutions of it

With a screen of a 6.8-inch display, accidental touches are prone to happen. The problems include the opening of the Edge apps or waking up the screen. The solution to these problems lies in your Settings only. Go to Settings and turn on the Accidental Touch Protection command. You can also disable the edged screen via Settings, and you can also enable some of the advanced options through Settings only.

The Full-Screen Problem and its Solutions

As the screen gets taller and wider, there are some of the apps who do not take the entire screen, which causes some left-out space on the screen. Like WhatsApp, Facebook, Instagram, etc. are updated every day, they do not face these kinds of problems, the real issue is for smaller apps. Do not worry at all, as you can still go to Settings and widen-up your screen display by tapping on the Full-Screen Mode.